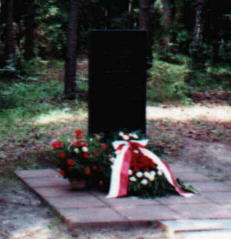 Skilfully created by a Russian craftsman, who obviously loved his work and believed the message he carved, a black polished memorial at Katyn Woods near Smolensk still proclaims a myth of Stalinism. Russia is a country which rightly reveres its war dead, but often conveniently forgets the contributing factors. What better way to help conceal the deaths of defenceless abandoned Russian prisoners of war by the neglect and callousness of Soviet Power than with a myth about the murder of your own people?

So many true believers and honest patriots disappeared into the cauldron of war; why not borrow five hundred "dead souls" for your purpose? After all, they are dead somewhere anyway, [but for their families, who cares where or how], and even dead they can serve Soviet Power.

After the terrible suffering of the Russian people under Soviet Power it is tragic to see war memorials to the dead still so cynically abused.

Soviet Power produced an army which in the "Great Patriotic War" alone cost the Russian people three dead soldiers for each dead German soldier. Russian people were forced under Soviet Power by NKVD bayonets and "blocking detachments" to clear minefields with their bodies, advance in dark clothing over snow to draw German fire, charge machinegun posts unarmed and generally be slaughtered brutally and anonymously in the name of maintaining Soviet Power. All this while well trained and equipped NKVD troops were used to guard the Russian gulags.

At the entrance to the Polish memorial at Katyn, as told in the Russian language "Moscow News" of 4-11 June 1995 [no 39 page 12], is the black polished memorial with the Russian inscription, a jarring reminder of Soviet Power. Long a public manifestation of Soviet Power's lies and duplicity, this simple stone is busy infecting the image of reform and progress of the new Russia. A festering reminder of the Soviet attitude to the truth, this stone abuses and defiles the memory of the millions of Russian people who suffered and perished under Soviet Power, many of them in the same Katyn Woods where the Polish dead were buried.

Having its origins in the cynical fabrications of the Soviet inspired 1944 Burdenko Special Commission report about the Polish dead in Katyn, the memorial was erected to support the lie that "500 Red Army men" at Katyn Wood were "marched for 3-4 hours in an unknown direction.... and then shot" after being forced by the Germans to exhume the Polish dead at Katyn. Supposedly, according to the Burdenko report, from "Smolensk camp No 126", these mythological 500 Russian POWs are about as real as the "Camp No 1 O N, Camp No 2 O N, and Camp No 3 O N,... located 25 to 45 kilometres west of Smolensk" for Polish POWs which suddenly appeared in Soviet communiques immediately after the German announcement of the discovery of the Polish officers shot by the NKVD in the Katyn Woods.

The perpetuating of this sort of Soviet myth does little to assure those of us in the West who wish Russia and Russians well that there has been any meaningful change in Russia. Until the Russian people can clearly both mentally and openly separate the acts of oppression by Soviet Power from the true heroism of the Russian people their chances of lasting personal security are small.

It is the business of the Russian people to decide whether they prosecute those who abused their power over them with such devastating results. It is the business of people such as myself to keep reminding the Russian people that Soviet Power also abused people of many other nations, and that, compared to the pursuit of the Nazi's war crimes which still carries on, Soviet Power has made no reparations.

It does no justice to the Russians or other nationalities who lie dead and largely forgotten in Russian soil for the present authorities in Russia to avoid the truth about Russian history by deliberately perpetuating myths and lies such as the Soviet memorial to the "500 POWs" at Katyn.

The Russian dead at Katyn, buried there by Soviet Power from 1918 to 1940, deserve recognition, as much recognition as the Poles who were buried in the same woods with them in 1940 by the NKVD. No recognition of Russian suffering is acceptable, nor will it rouse my compassion, if it is presented in such a way as to deliberately and cynically attempt to mitigate, with references to Russian losses, Soviet Power's guilt for the Polish dead. Until Russia moral and political maturity is reached to the extent that the two events can be seen as history, which, while demanding due recognition, is the history of two distinctly separate issues, I say there is little hope for the future of the Russian people.

Three major sites of Polish dead have been confirmed. Poles slaughtered by Stalin's order of 5 March 1940, the original of which has been revealed in the light of glasnost. This single order lead to the shooting of some 25,700 people. Over 1.5 million Poles disappeared into Soviet Russia. It is time the Russian people and their government stopped expecting a few paltry ostentatious admissions of long known guilt to satisfy concerns about the behaviour of those who now rule Russia from their training ground of Soviet Power.

Let us also see an open admission that people such as Parfen Favrilovich Kisselev, "born 1870, who lived in the hamlet nearest to the country house in Kozy Gory" were beaten and tortured under Soviet Power, forced to participate in constructing the lying fabric of the Burdenko Special Commission report. For instance, the following statement is also from the Burdenko report:

"The injuries caused to Kisselev at the Gestapo (injury of shoulder, considerable impairment of hearing) are confirmed by a report of medical examination."

This would be a true statement if we replaced "Gestapo" with "NKVD".

I have long waited for news that the three memorials to Russian zeks as suggested in the "Gulag Archipelago, parts i & ii" [page 550 English edition] by A Solzhenitsyn are being constructed. These would serve as a powerful focus to demonstrate to the world a new direction for Russia; an even more powerful message to the youth of Russia if taken together with his sentiments on Soviet Power's abuses as set out in the same book at page 176-8:

"Not to put them on trial so much as their crimes. And to compel each one of them to announce loudly; 'Yes, I was an executioner and a murderer."' .........

"It is unthinkable in the twentieth century to fail to distinguish between what constitutes an abominable atrocity that must be prosecuted and what constitutes that 'past' which 'ought not to be stirred up.'

We have to condemn publicly the very idea that some people have the right to repress others. In keeping silent about evil, in burying it so deep within us that no sign of it appears on the surface, we are implanting it, and it will rise up a thousand fold in the future. When we neither punish nor reproach evildoers, we are not simply protecting their trivial old age, we are thereby ripping the foundations of justice from beneath new generations. It is for this reason, and not because of the 'weakness of indoctrinational work', that they are growing up 'indifferent'. Young people are acquiring the conviction that foul deeds are never punished on earth, that they always bring prosperity. It is going to be uncomfortable, horrible, to live in such a country!"

David Paterson Mirams, PO Box 17-141, Karori, Wellington, New Zealand, asserts the moral authority to be recognised as the author of this work. [1995]

PS If you think I am a bit too focused on this Soviet era "memorial", perhaps a trip to Smolensk on the web will help convince you that the Soviet/Russian admissions about Katyn so far have been very limited and half-hearted.
The text of the article, reporting a ceremony at Katyn on 28 July 2000, is in Russian, but even without any abilty in Russian you will recognised, about half way down the page, to the left of the fourth photograph in the article, the date "mae 1943" and the figure "500".
The sentence in Russian basically says: "flowers were laid by dignitaries at the memorial plaque/tablet for here shot by the Hitlerites in May 1943 were 500 Soviet prisoners of war". Those non-existant 500 products of the fertile NKVD minds that shot the Poles in 1940, and wrote the Burdenko Commission report in 1944 to blame the Nazis for Katyn.
Here we are, 56 years later in 2000, supposedly Stalinism is behind us, but apparently the progeny of the NKVD still control the Katyn memorial site.
November 2000
PPS The Smolensk site URL has changed. Unfortunately they have simply changed the reference to the non-existant Soviet POWs and are perpetuating the Soviet lies about Katyn.
"Mae 1943" and "500" are still the indicators to non-Russian speakers who want to check the relevant page on the new site.
Unfortunately the locals in Smolensk seem to be true believers in some of the more tragic Soviet myths who do not know any better. So they are still harping on about the Burdenko Commission's nonexistant 500 Soviet POWs.
September 2003